Chris Sagers is a certified USPTA Elite tennis professional with more than 20 years of teaching experience.  He served as the head tennis professional at the Black Hawk Tennis Club from 1999-2011 before taking over as owner in 2011.  He continues to serve as the Director of Tennis at the Black Hawk Tennis Club.  Sagers also served as a head tennis professional at the Wakonda Club in Des Moines from May 1999 to Sept. 1999.  Sagers has coached many top ranked USTA Missouri Valley players and Iowa high school state qualifiers and champions, which have gone on to play collegiate tennis.  Sagers played for the UNI men’s tennis team from 1995-99.  He played No. 1 singles and doubles for the Panthers.  Chris Sagers took over at the head women’s tennis coach at the University of Northern Iowa in August 2014.  Sagers led the Panthers to a 16-7 dual mark in his first year as the UNI head coach.  UNI’s 16 dual wins was the most for the program since the 2010-11 season.  Under Sagers’s guidance, UNI senior Erica Medlin was named the 2015 Missouri Valley Conference Player of the Year.  UNI posted an 11-2 home record in Sagers’s inaugural year with the Panthers – a stretch that included a 17-match home win streak that carried over from the 2013-14 season.  UNI placed third in the MVC standings with a 5-2 dual mark.  The Panthers knocked off Bradley in the MVC Tournament quarterfinals before falling to Drake in the semis.  In 2018 the Panthers captured runner-up at the Missouri Valley conference tournament.

Javier Hervas is a Tennis Pro at the Black Hawk Tennis Club. Javier Hervas, a native of Arica, Chile, was a top-10 ranked junior player in his home country at the age of 15 and number one of his regional zone until the age of 19. He played the Junior South American Tour ( COSAT) until the age of 18 competing with a wide variety of players from all over the world. Some of them, ended up being well known Pro players such as; Hewitt, Nishikori, Gonzalez, Massu, Coria, Chela, Nalbandian among others. After he decided to end his tennis career, he went to physical therapy school and earned a degree in Physical Therapy; licensed in rehabilitation in 2010. His professional experience includes Traumatology, respiratory diseases and respiratory therapy, and Sports traumatology and Performance. Javier earned his master’s degree in Kinesiology (Biomechanics emphasis) at UNI in 2014, where he worked closely with athletes at UNI, doing research in sports performance and injury prevention.  2013-2016, he was involved with the UNI women’s tennis program as an assistant coach. His thesis project entitled “3D Variability in ball toss and impact location for tennis serves in collegiate female players.” was selected among several thesis projects at UNI for a presentation at the Iowa Capitol. His study, which is the first of his kind, sets a precedent in tennis performance research for the UNI Women’s tennis program. 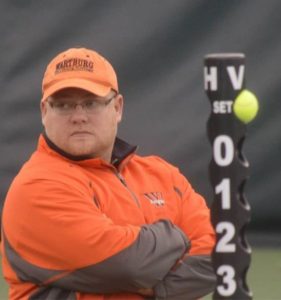 Welcome Mike Strydom – Tennis Pro, Black Hawk Tennis Club.  Born in Zimbabwe and raised in South Africa, Mike represented his province in Tennis, Squash and cricket and was the number one tennis player for both doubles and singles in the region in 1998 and 1999.  Mike has over 19 years of teaching and coaching experience all over the world.  After receiving his TSA (Tennis South Africa) coaching certificate, Mike accepted the job as a teaching pro at the Frenchwoods Festival of Arts in Hancock, NY in charge of developing high school players throughout the 11-week summer period. Returning to South Africa in 2000, Mike became the head tennis coach of Port Shepstone High School and coached the boys team for one year resulting in a 15-3 season which still ranks as the school’s winningest season. Mike also volunteered as the head coach for St. Martins Des Porres high school for the deaf in 2000 and was instrumental in forming their first organized team to compete against other regional schools.  After moving to Iowa in 2005, Mike was announced as the Assistant Tennis coach at Wartburg college for both the men’s and women’s teams in 2006 and was elevated to the head coaching position in 2012 during which time he compiled a 65-68 combined record over three seasons, good for third all-time in the record books. Mike was responsible for recruiting the largest teams for both men and women in 2015 and coached 30 all-conference players and 47 all-academic conference players. Mike was also at the programs helm when Wartburg Men recorded their first ever wins over regionally ranked Luther College and Grinnell college in 2015 and 2016 respectively and achieved the team’s highest place conference finish (2nd) in 2015. Mike was also the co-director for the Adidas tennis camps that took place in 2015 and 2016 in Peoria, Illinois. In 2016, Mike spent 6 months as the Director of Boarding for high performance athletes competing in golf and tennis at the prestigious Saddlebrook academy in Tampa Bay, Florida. Under the direction of Howard Moore who’s “Harry Hopman academy” is responsible for coaching many of the world’s top tennis players including, John Isner, Jennifer Capriati, Jack Sock, Alex Zverev, James Blake, Martina Hingis, Jim Courier and Pete Sampras, Mike was responsible for ensuring the day-to-day organization for the academy’s players as they managed their physical training, tennis practice, academic, tournament play and social responsibilities. As one of the largest and most successful tennis academies in the world, Mike worked with high school aged youth from over 25 countries as they sought their goal of playing division 1 and professional tennis. Several of the players he worked with during this time have gone on to play division I college tennis including current players at UConn, Northwestern, Purdue, TCU, Xavier and Harvard.  In 2017, Mike returned to Iowa to work in the financial field for MassMutual and revived his private lesson schedule with local high school students. Mike has privately coached 4 IA state champions and 3 runner-ups from the Waverly, Shell-Rock school district in the last 8 years. A further 9 of these athletes have gone on to play college tennis. Mike currently serves as the Men’s assistant coach at Wartburg college for the 2018/19 season.

**Any cancellations must be done 24 hours prior to scheduled lesson time, and charges will be applied to account due to inconvenience for the tennis professionals, and for the court time that went unused.

David “DJ” Grant is the Guru of Sand Volleyball. DJ played tennis at West High School qualified for State in doubles in 2009.  Consistently ranked in the top ten of junior players for USTA in the state of Iowa.

DJ attended Wartburg 2 years and played tennis for the Knights.  Then he transferred to University of Northern Iowa, graduating in 2014 with a Bachelors of Social Science.  DJ has run the Sand Volleyball program for several years now and available to answer your volleyball questions.